On the Record: Episode 5, ‘Trust within Yourself’ featuring Ashley La Russa

Meet Ashley La Russa: manager, entrepreneur, educator, and innovator. You may know Ashley from her extraordinary work as the founder of Roux Events and Blax Friday. As an expert in combining her passion for theatre, event management, and diversity, equity and inclusion, Ashley uses every tool in her kit to measurably improve Tucson’s community. And while the nature of her work is best experienced in person, it is backed up by an inspired online presence, including the Blax Friday app (go download it now) and the Roux Events website, both of which set her apart as a leader in her field.

Ashley serves on the Local First Arizona Steering Committee, WFSA Annual Luncheon Committee, and Board of Directors at the CITY Center for Collaborative Learning (CITY CCL). Through her work, she partners with owners of hotels, co-working spaces, and event venues to strategically plan how to serve the community as a whole. In 2018, she was the Projects Manager at Downtown Tucson Partnership (DTP) where she actively communicated upcoming events and programs to the community. During her ten years with the Arizona Theatre Company (ATC), Ashley served in a variety of positions, including Assistant Stage Manager, Company Manager, and finally Management Associate/Board Liaison.

Join Ashley and Chad as they talk entrepreneurship, actionable diversity and inclusion, and new ways to bring Tucson’s community together. 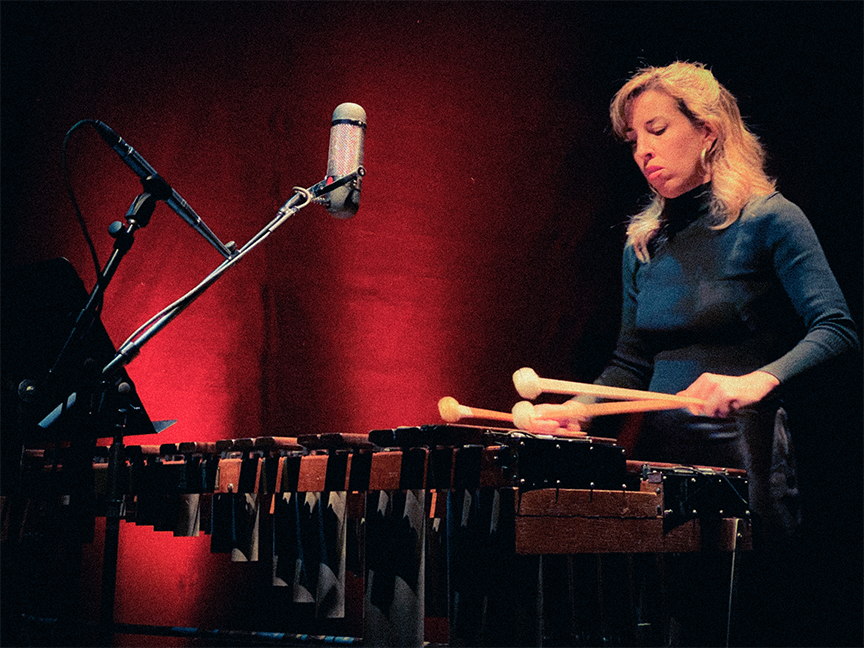 Join us to witness Elizabeth Goodfellow’s exquisite songs light up the Centennial stage. As a full-time percussionist, Elizabeth and her marimba are usually on the road, so we were fortunate to catch her during a moment of relative stillness. This set, featuring a collection of new original material written during lockdown, furthers our assertions that, thanks to artists like Elizabeth, a musical renaissance is on the horizon. Elizabeth Goodfellow is a Los Angeles-based drummer, percussionist, and vocalist (Iron and Wine, Madison Cunningham, boygenius, Per Gessle). She grew up in Northern California’s San Joaquin Valley and started playing drums at age eleven at local harvest festivals. Beth’s first professional drumming job was playing in the Air Force National Guard Band of the West Coast while studying classical percussion performance at San Jose State University. In 2003 she was selected to the IAJE’s Sisters in Jazz Quintet which performed at the North Sea Jazz Festival. After spending over a decade in the San Francisco Bay Area music scene, an appearance on America’s Got Talent in 2012 and a recording gig with Swedish band Roxette’s Per Gessle (En Vacker Dag, 2017) inspired her to move to Los Angeles where she sold vintage clothes in order to self-release and produce her first album on cassette: “Silly Sun”, 2018. Shortly thereafter she landed a touring job with folk artist Iron and Wine, where she was required to sing backup vocals and drum at the same time. In summer 2018 Beth recorded drums at Sound City with Phoebe Bridgers, Julien Baker, and Lucy Dacus for their boygenius EP. In 2019 Beth released her digital EP, “Sea Ranch”, and spent several months on the road as drummer with Grammy-nominated artist Madison Cunningham, as well as touring Asia and Europe with NYC jazz group The Hot Sardines. In early 2020 Beth released her digital single, “Milwaukee”. During the COVID-19 pandemic, Elizabeth focused on home recording, including tracking backing vocals for remote collaborations (Calexico). In the fall of 2020, Beth spent several weeks in Tucson, AZ, writing for marimba and vocals and releasing the short songs in a Bandcamp-only album, “Hunting the Silence”. Elizabeth’s latest single, “Terror and Trust”, was released on February 12th, 2021, and will be available on vinyl in summer, 2021 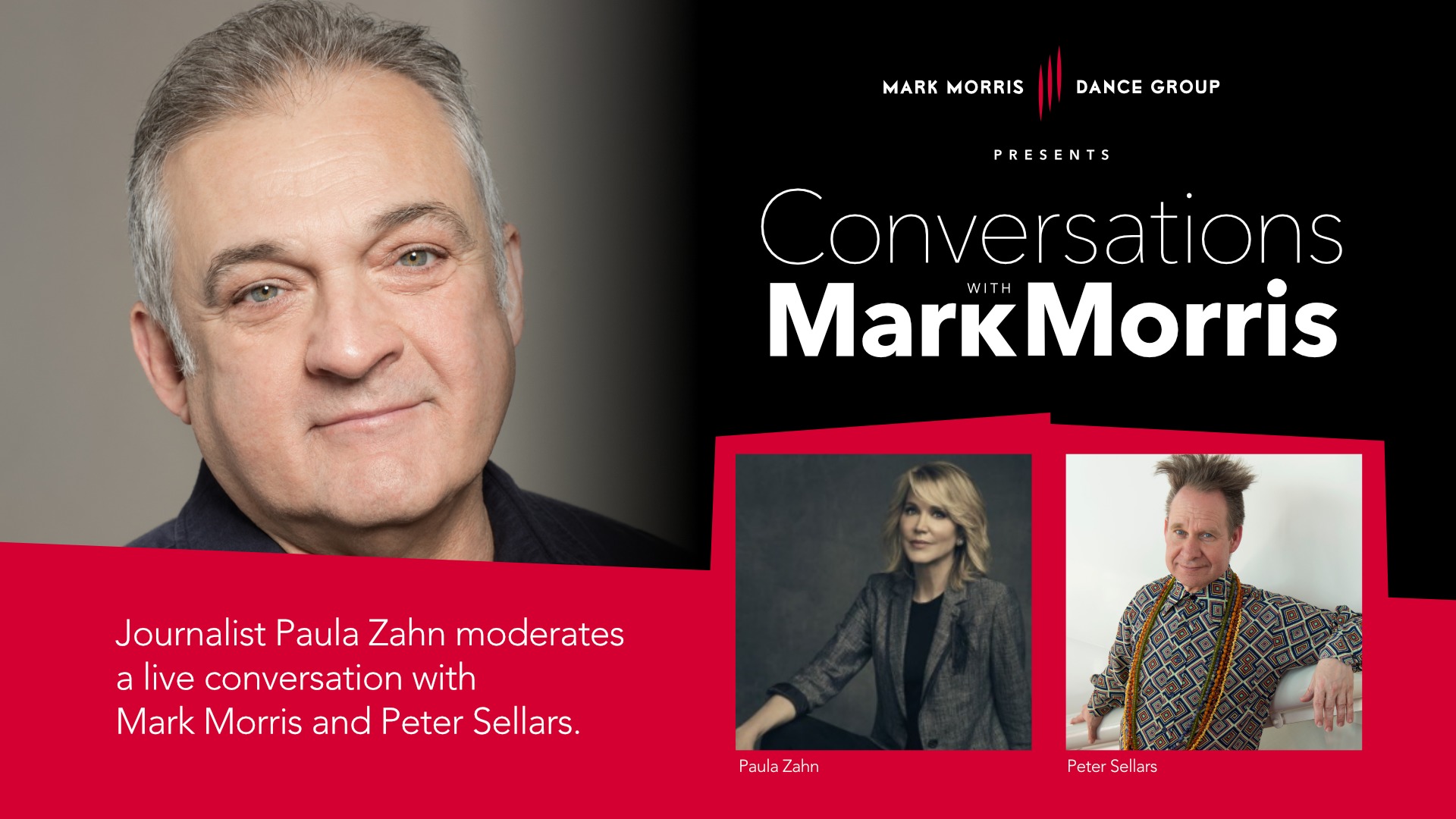 Mark Morris Dance Group presents a live, interactive conversation about the arts, music, and food moderated by journalist Paula Zahn, featuring Mark Morris with special guest and world-renowned director Peter Sellars. This experience will take place on STAGE ACCESS™ and includes a live Q&A where participants can add their questions in the chat box. The stream will not be available to watch on demand after it has concluded. “Direct, brash, flippant, charming, impenetrably self-assured. And funny.”The New York Times Mark Morris, praised as “the most successful and influential choreographer alive, and indisputably the most musical” (The New York Times), was born in Seattle, Washington, where he studied with Verla Flowers and Perry Brunson. In the early years of his career, he performed with Lar Lubovitch, Hannah Kahn, Laura Dean, Eliot Feld, and the Koleda Balkan Dance Ensemble. He formed the Mark Morris Dance Group (MMDG) in 1980 and has since created over 150 works for the company. From 1988 to 1991, he was Director of Dance at the Théâtre Royal de la Monnaie in Brussels, Belgium’s national opera house. In 1990, he founded the White Oak Dance Project with Mikhail Baryshnikov. Morris is also an acclaimed ballet choreographer, with twenty-two works commissioned by ballet companies worldwide. Noted for his musicality, Morris has been described as “undeviating in his devotion to music” (The New Yorker). He was named a Fellow of the MacArthur Foundation in 1991 and has received eleven honorary doctorates to date. He has taught at the University of Washington, Princeton University, and Tanglewood Music Center. Morris opened the Mark Morris Dance Center in Brooklyn, New York, in 2001 to provide a home for his company, subsidized rental space for local artists, community education programs for children and seniors, and a school offering dance classes to students of all ages and levels of experience with and without disabilities. Nine-time Emmy award-winning journalist Paula Zahn is the executive producer and host of Investigation Discovery’s On the Case with Paula Zahn and host of WNET’s weekly arts and culture multi-platform showcase, NYC-Arts. On The Case is one of the longest running investigative crime series on ID. Zahn began her journalism career in local news and was first introduced to national audiences as an anchor for the news segments on ABC News’ Good Morning America. She went on to host shows for CBS News, Fox News, and CNN. Zahn’s many years of reporting have not only won her the public’s trust, but many prestigious honors and has also been recognized by The Albert Einstein College of Medicine, Beth Israel Medical Center, and the Congressional Families Action for Cancer Awareness among others, for her indefatigable work in raising awareness of cancer prevention and treatments. An accomplished cellist, Zahn attended college on a cello scholarship. She has performed with renowned musicians in world-class venues including with the New York Pops at Carnegie Hall, the National Symphony Orchestra at the Kennedy Center, Sejong Soloists at Hoam Art Hall in Seoul, and with Maestro Rostropovich in St. Petersburg, Russia as part of the 100-cello orchestra he conducted. Zahn is a member of the WNET Board of Trustees and on the Board of Governors of the Alzheimer’s Drug Discovery Foundation. Peter Sellars is an opera, theater and festival director who has gained international renown for his groundbreaking and transformative interpretations of classics, advocacy of 20th century and contemporary music, and collaborative projects with an extraordinary range of creative artists. His works explore issues that connect the contemporary and the timeless, with an understanding of art’s power as a means of social action and moral expression. His many notable productions include his creations with composer John Adams, including Nixon in China, The Death of Klinghoffer, and, most recently, The Girls of the Golden West. Sellars has led several major arts festivals, including the 1990 and 1993 Los Angeles Festivals and the 2002 Adelaide Arts Festival. In 2006 he was Artistic Director of New Crowned Hope, a festival in Vienna, Austria for which he invited artists from diverse cultural backgrounds to create new work in the fields of music, theater, dance, film, the visual arts and architecture. He is a distinguished professor in the Department of World Arts and Cultures and the director of the Boethius Initiative at UCLA, a resident curator of the Telluride Film Festival, and was a mentor for the Rolex Arts Initiative. His many awards include a MacArthur Fellowship, the Erasmus Prize for contributions to European culture, the Gish Prize, the Polar Music Prize, and the designation of “Artist of the Year” by Musical America. Sellars is a member of the American Academy of Arts and Sciences. ABOUT STAGE ACCESS™STAGE ACCESS™ is the on-demand streaming platform featuring iconic content in dance, opera, concerts and theatre. Highlighting performances from the world’s most beloved arts companies, including world premieres and livestreams, Stage Access features a growing list of original content only available for streaming on its platform including Yo-Yo Ma, Six Solo Bach Cello Suites from the Odeon, Athens and The 3 Tenors: From Caracalla to the World, The 30th Anniversary Documentary. Currently available in North America on the web at www.stageaccess.com, iOS, Android, Apple TV, Amazon Fire and Roku, STAGE ACCESS™ was founded with the mission of expanding access to the arts and providing support for arts organizations.

BANDALOOP honors nature, community, and the human spirit through perspective-bending, vertical dance. Using buildings on the UArizona Campus Mall as a dance floor on its side, BANDALOOP creates a new and original performance suited for the times we are all living in. A pioneer in vertical performance, BANDALOOP seamlessly weaves dynamic physicality, intricate choreography, and climbing technology to turn the dance floor on its side. BANDALOOP’s site-reactive work has been presented worldwide in theaters and museums, on skyscrapers, bridges, billboards, and historical sites, in atriums and convention halls, in nature on cliffs, and on screen. These experiences are part of the March 9-10 Reading Days. The faculty senate approved a decision to replace the 2021 Spring Break with a series of Reading Days spread throughout the Spring 2021 semester. This adjustment to the academic calendar is a necessary component of our ongoing commitment to limit the spread of COVID-19 in the Tucson community and across the nation by reducing travel by faculty, staff and students.  ABOUT BANDALOOP Founded by choreographer Amelia Rudolph and under the artistic direction of Melecio Estrella, BANDALOOP re-imagines dance, activates public spaces, and inspires wonder and imagination in audiences around the world. The company trains dancers and youth at home and on tour, and has performed for millions of people in over 22 countries in Europe, Africa, the Middle East, the Americas, and Asia, and on screens in films and digital media. BANDALOOP is based in Oakland, CA, where the company creates work for its bi-annual home season and for touring performances presented around the globe each year.  Education and outreach are also an intrinsic part of the company’s mission. In addition to its ongoing work with youth, BANDALOOP offers regular classes, camps, and intensives at its home studio and in the mountains, and team building programs for business executives. PLAN YOUR VISIT: Employees, students, and visitors must use face coverings in all UArizona locations, both indoors and outdoors, in accordance with UArizona’s Administrative Directive. All visitors are encouraged to download Covid Watch Arizona, the University’s new, free and anonymous exposure notification app.