Tune in Thursday, April 8, at 6p for Sharkk Heartt’s stirring songwriting, vocal heft, and top notch production. This Tucson based singer-songwriter provides electronic sounds that will get your heart pounding, and pairs them with singular lyrical depth. Sharkk Heartt joined us in Centennial Hall ahead of the release of her first album to share four dynamic songs that will leave you wanting four more.

Four years ago, Sharkk Heartt singer-songwriter Lara Ruggles found herself driving to Tucson, Arizona to move in with her dad and stepmom. Lara was 30, enduring heartbreak, reeling from a band breakup, and unable to keep her bills paid. She was feeling rudderless and bracing for the start of the Trump administration.

“I was questioning the hell out of myself,” the Tucson, Arizona-based artist recalls. “I was writing songs that were bigger than me, finally – that dealt with things in the world on a larger scale than just me and my own emotional experience. These songs gave me purpose in a time when I had lost the thread.”

Sharkk Heartt’s debut, Wars Our Mothers Fought, features these seismic songs. They are culled from a transformative and tumultuous time during which Lara internalized the necessity of intersectionality in activism. Spurred on by her close relationship with several LGBTQ friends, the realization that “no one is liberated until everyone is liberated” hit home. The resulting, impactful 7-song album from this epiphanic time features moody downtempo electro-pop music paired with sharp political and cultural commentary. Sharkk Heartt’s music would fit snugly on a Spotify playlist alongside artists such as Vagabon, Broods, London Grammar, and Florence + the Machine.

Join us on Thursday, April 8, at 6p for the premiere of Sharkk Heartt’s live performance video with The Tucson Studio. Subscribe to youtube.com/arizonaartslive to never miss a release! 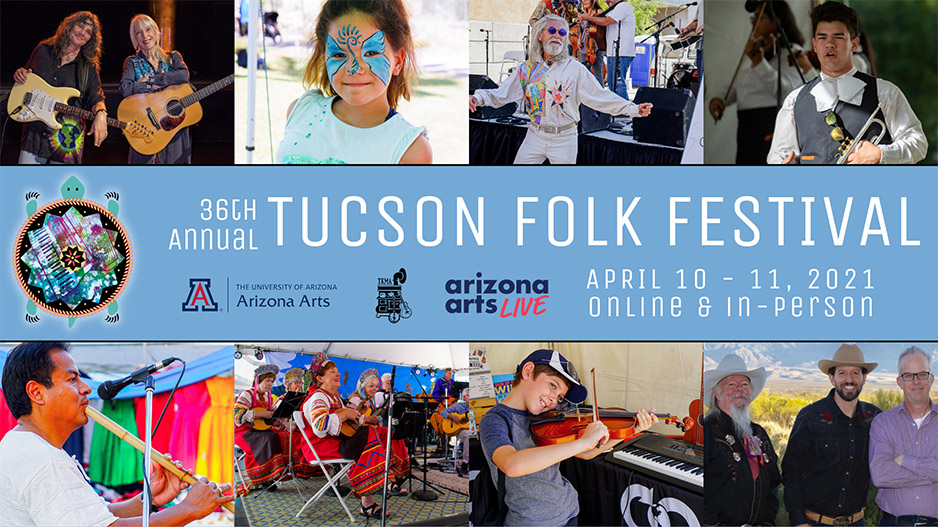 The Tucson Folk Festival returns for its 36th year, April 10-11, with a range of new ways to enjoy the festival, including over 75 socially-distanced performances, broadcast live from three stages. Centennial Hall at the University of ArizonaDrive-In Stage at Park Place MallMSA Annex at Mercado San Agustin All performances will be broadcast live for free viewing online; viewers can watch the Festival at home, in a car, or in person. NATIONAL HEADLINERS Grammy Award-winning folk and bluegrass artists Laurie Lewis & Nina Gerber will perform live from Berkeley, California. Their performance will be broadcast live both online and to the big screen at Park Place and MSA Annex stages on Saturday, April 10, from 8-9:15p. REGIONAL HEADLINER The Tucsonics, featuring special guests, will perform live on the Drive-In Stage at Park Place Mall on Sunday, April 11, from 7-8:30p. It will also be viewable online and on the MSA Annex Big Screen. FAMILY SHOW HEADLINER Ron Pandy will perform live on the Centennial Hall stage, presented by Arizona Arts and Arizona Arts Live, and streaming online on Sunday, April 11, at 12:15p. Remaining performers are a who’s who of local and regional fan favorites, including such beloved artists as the Heather Hardy Band, JC & Laney, Ryanhood, CS&M Trio, Gertie and the TO Boyz, P.D. Ronstadt & the Company, and so many more.  STAGE SCHEDULES Saturday, April 10Noon – 9p … Drive-In Stage at Park Place Mall10:30a – 7p … Centennial Hall at University of Arizona11:45a – 9p … MSA Annex at Mercado San Agustin, 11:45 AM – 9 PM Sunday, April 1111:30a – 9p … Drive-In Stage at Park Place Mall10a – 7p … Centennial Hall at University of Arizona11:45a – 9p … MSA Annex at Mercado San Agustin LOCATIONS Drive-In Stage at Park Place MallNo reservations are required. Up to 300 cars can view the performances in a spaced-out parking spaces just southeast of Park Place Mall (in the lot behind LA Fitness near Wilmot and Broadway). This stage features live performances viewable by car and broadcasting live online. Centennial Hall at the University of Arizona, presented by our Arizona Arts and Arizona Arts Live. This stage will not have an in-person audience and is viewable online by live broadcast. This stage will feature live performances all weekend, the Young Artist Showcase and the Ron Pany Family Show on Sunday at 12:15p, and a broadcast of our pre-recorded Stefan George Memorial Songwriting Competition on Saturday. MSA Annex at the Mercado San Agustin, where up to 94 attendees can view the live performances in spaced-out seating pods. MSA Ticket reservations are required for MSA Annex and can be made at any Bookmans store, online at the Festival website or on site. HOW TO WATCH All performances will be available as a free-to-watch live broadcast accessible through the Tucson Folk Festival website, with audience members invited at the Drive-In Stage at Park Place Mall (no reservation required), and to socially-distanced pod seating at the MSA Annex (reservation required).  TICKETS MSA Annex ticket reservations can be made in any Bookmans store or online at the Festival website. 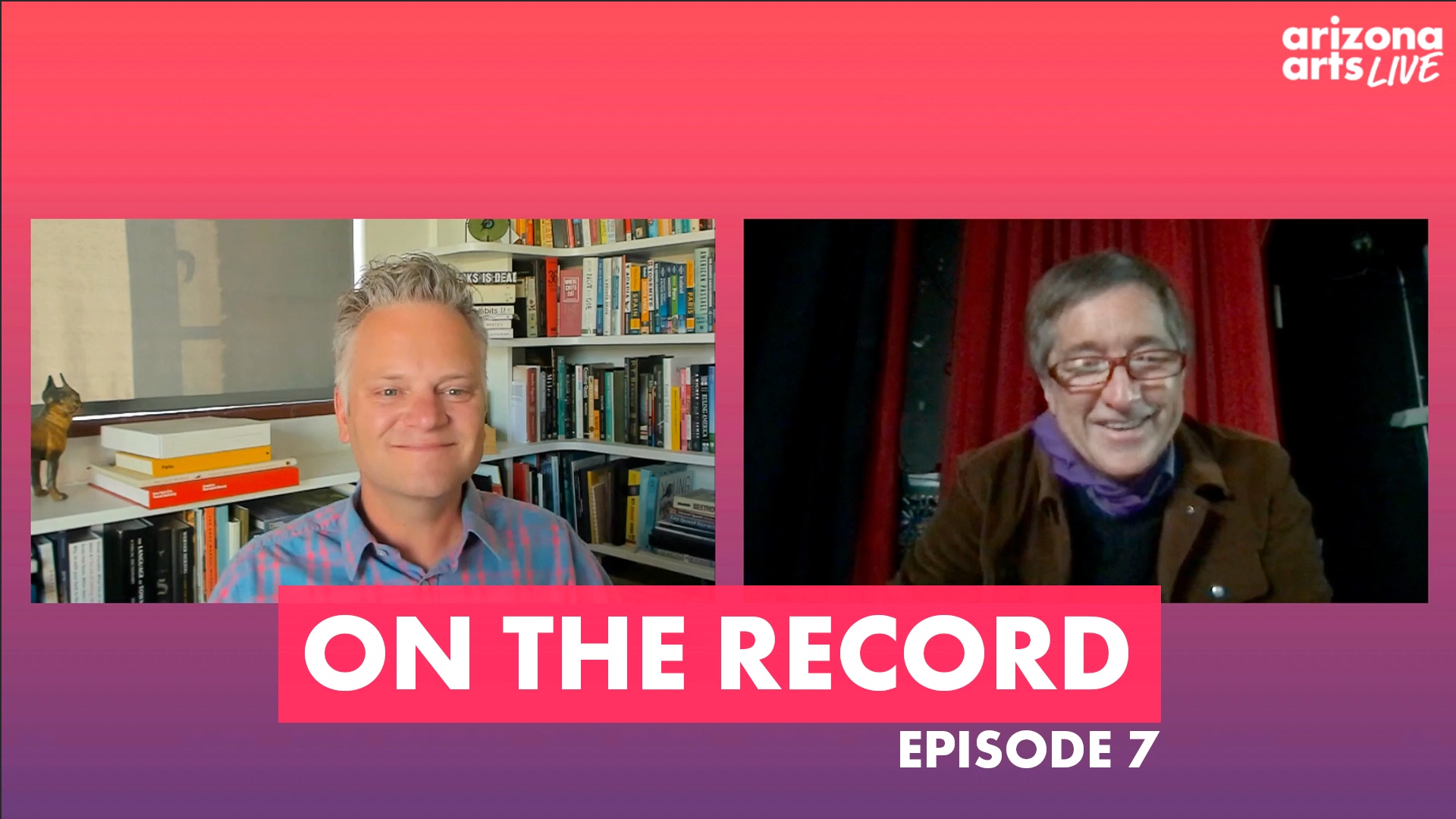 For nearly 25 years, David Slutes has worked at Hotel Congress in the heart of Downtown Tucson. The last 16 years have been spent as the Entertainment Director, booking, actualizing, and overseeing the exceptional range of events, performances, and festivals offered by Club Congress. The Hotel, its bars, restaurants, two stages, and its patio have been the stomping ground for millions of Tucson residents: young and old, musicians and politicians, students and professors, and everyone in between. David has a unique perspective on life in Tucson, guided by what its citizens do for fun on a Friday night.  Join us for a conversation between David and Chad that encompasses everything from the miraculous number of booking managers and promoters that ‘graduated’ from the congress team to the organization’s efforts to double down on diversity and inclusion through its programming and training. Tune in as David pulls back the curtain on Congress, and enjoy an inside look at one of Tucson’s most beloved institutions.